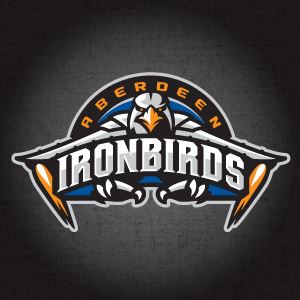 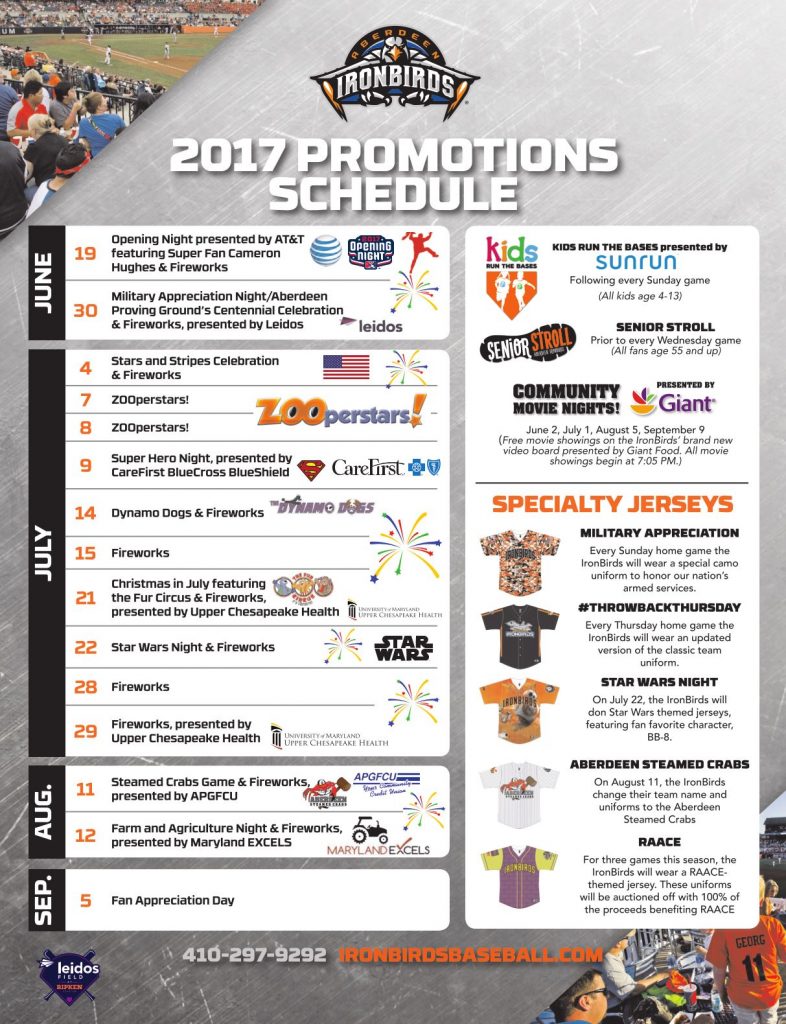 Aberdeen, Md. (May 11, 2017) – The Aberdeen IronBirds, Class A short season affiliate of the Baltimore Orioles, today announced its promotional schedule for the 2017 regular season. Headlined by popular traveling entertainment acts and themed promotional nights, IronBirds fans attending games at Leidos Field at Ripken Stadium have the opportunity to enjoy 11 post-game firework shows throughout the season.

“Our goal is to deliver the best possible entertainment experience for our dedicated fans,” said IronBirds General Manager Matt Slatus. “This season’s action-packed schedule provides affordable family fun for fans of all ages.”

Opening Night presented by AT&T is set for Tuesday, June 19 as the IronBirds host the Hudson Valley Renegades featuring entertainment by Super Fan Cameron Hughes and a post-game fireworks display. On June 30, the IronBirds will host Military Appreciation Night presented by Leidos and a fireworks show, followed by a special Fourth of July Stars and Stripes Celebration and fireworks show honoring our country’s independence.

Things heat up in July, when the IronBirds welcome nationally renowned entertainment acts, including the ZOOperstars! (July 7-8) and Dynamo Dogs (July 14) to perform at Leidos Field at Ripken Stadium. New to this year’s promotional lineup, the IronBirds will become the Aberdeen Steamed Crabs courtesy of APG Federal Credit Union to honor Maryland’s favorite pastime (August 11), and will host Farm and Agriculture Night presented by Maryland EXCELS (August 12).

Regularly occurring theme nights include Military Appreciation Sundays presented by Leidos where players will wear special digicamo uniforms to honor our nation’s armed services, as well as #ThrowbackThursday nights where the team will don updated versions of the team’s original uniforms featuring the ‘bomber’ logo. Every Thursday game will also include pregame throwback pricing in one of the ballpark’s new areas, Chesapeake Fresh featuring Dogfish Head, located in right field.

Following every Sunday game, kids age 14 and under have the opportunity to run the bases courtesy of Sunrun, while fans age 55 and up are invited to round the warning track as part of the Senior Stroll before every Wednesday game. Throughout the season, the IronBirds will also host Community Movie Nights presented by Giant Food (June 2, July 1, August 5, September 9) where family and friends can watch free movie showings on the IronBirds’ new 1,500 square foot high-definition video board from the outfield comforts of Leidos Field at Ripken Stadium.

Single game tickets go on sale Saturday, May 13 and can be purchased online at www.IronBirdsBaseball.com or by visiting the box office at Leidos Field at Ripken Stadium, which is open from 10:00 a.m. – 2:00 p.m. on Saturday and 9:00 a.m. – 5:00 p.m., Monday through Friday. The IronBirds’ new 5-game “Best Ticket Plan Ever,” featuring tickets to five sold out games, plus an exclusive IronBirds hat, is also available.