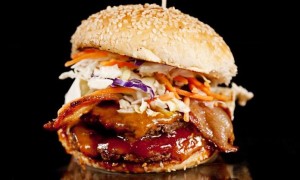 Check out this great deal for Gino’s in Aberdeen!

In 1957, while in the twilight of their careers as Baltimore Colts in the burgeoning NFL, Alan Ameche and Captain Gino Marchetti opened up the first Gino’s with their pal, Louis C. Fischer. Through the years, the crew helped innovate the restaurant industry, especially with the Gino’s Giant burger in 1966, whose triple-decker design arguably went on to inspire the multipatty burgers of other national fast-food chains. Ahead of their time, the team later cobranded with Kentucky Fried Chicken to bolster their menu and widen their appeal to the public before Gino’s was acquired by the Roy Rogers brand in 1982, leaving many nostalgic for one of the fast-food industry’s originals.

It wasn’t until 2009, when Tom called up Gino to pose the idea of bringing Gino’s back, that fans of the eatery could begin to quell their well-documented nostalgia in anticipation of enjoying Gino’s special recipes once again. Today, the menu boasts off-the-grill burgers, real ice-cream shakes, and the return of the Gino’s Giant, slathered in a secret sauce that was kept secret all these years by hiding it inside a modern-day football.

The Aberdeen Gino’s is located at:

Disclosure: This post may contain affiliate links. That means I receive a small compensation if you make a purchase. Thank you for your support.