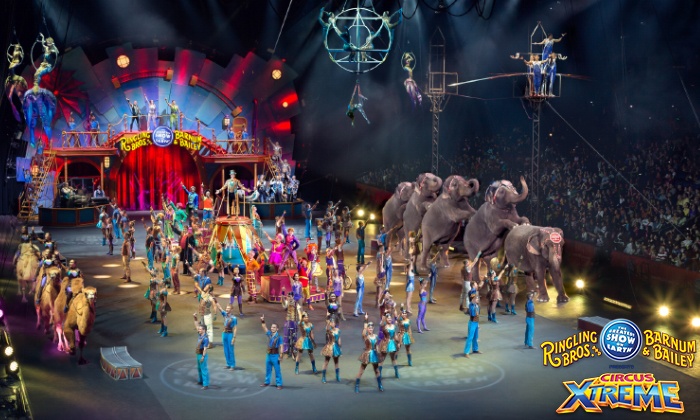 Baltimore, MD – February 17, 2016 – Ringling Bros. and Barnum & Bailey Presents Circus XTREME, features artists who redefine the word extreme in everything they do, magnifying traditional elements of the circus and combining them with never-before-seen spectacles, original fast-paced performances and incredibly hilarious moments. Audiences will be dazzled and astounded by the beautiful Bengal tigers, double-humped dromedaries ridden by brave Mongolian women and, for the last time, the most popular members of the Ringling Bros. and Barnum & Bailey family: the magnificent Asian elephants.

Circus XTREME will come to life at the Royal Farms Arena in Baltimore, M.D., from March 16-27, 2016. Circus XTREME will also perform at two additional arenas in the Greater Washington, D.C. area. The show will be at the Verizon Center from March 31-April 3, and the Eagle Bank Arena in Fairfax, V.A., from April 6-17.

The party starts an hour before the show with the All Access Pre-show, which is free with your ticket purchase. You and your family can meet performers and get up close to the menagerie of animals. Try on custom costumes, learn circus skills from the famous Ringling Bros. Clown Alley and even have the opportunity to win a one-of-a-kind masterpiece created by one of our very own Ringling Bros. painting pachyderms. Ticketholders can also purchase an upgrade and go backstage with a VIP Behind the Scenes Tour of Ringling Bros. and Barnum & Bailey.

The show is also the last opportunity for local residents to see the treasured Asian elephants before they are moved to their permanent home at the Ringling Bros. Center for Elephant Conservation® in Florida in May 2016. The elephants’ move to Ringling Bros. Center for Elephant Conservation will allow the company to focus on its Asian elephant conservation program and the pediatric cancer research partnership with Dr. Joshua Schiffman of Primary Children’s Hospital and The Huntsman Cancer Institute in Salt Lake City, Utah.

You can only experience extreme thrills, exotic animals and extraordinary performers at Ringling Bros. and Barnum & Bailey Presents Circus XTREME, get your tickets for the thrilling entertainment experience today!

Tickets for Ringling Bros. and Barnum & Bailey Presents Circus XTREME start at $15. Restrictions, exclusions and additional charges may apply. All seats are reserved, and tickets can be purchased at all Ticketmaster outlets, by phone at 800-745-3000, via www.ticketmaster.com, and the Royal Farms box office. For group rates and information, call the Royal Farms Arena Group Sales department at 410-347-2006.