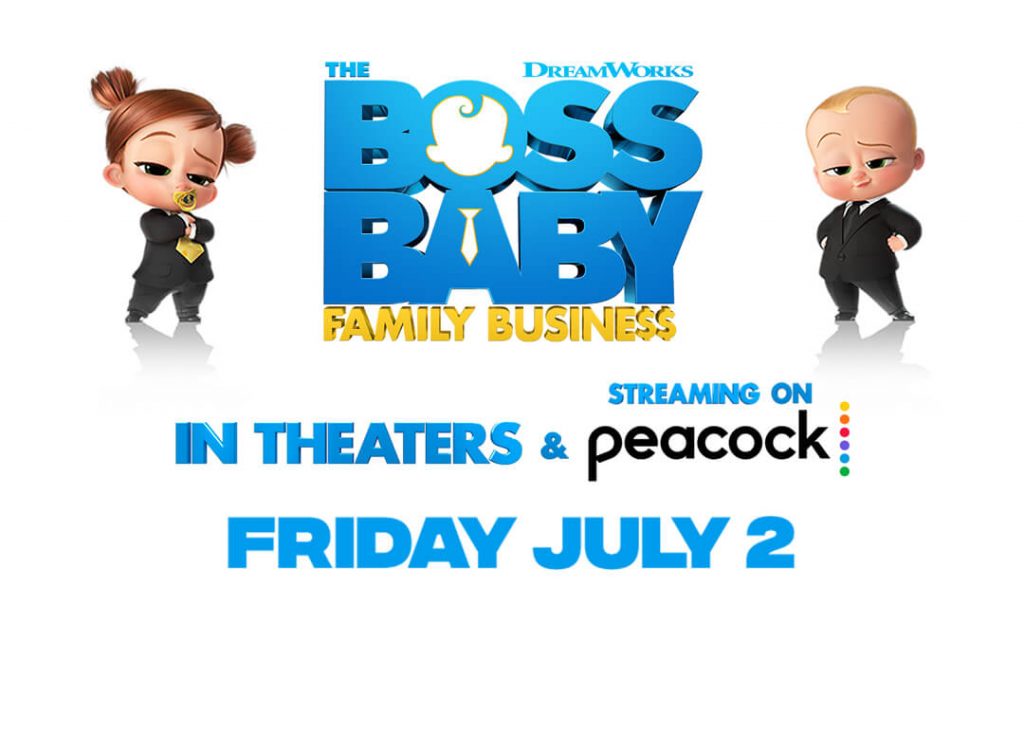 When my family was invited to see an early screening of Dreamworks Animation’s The Boss Baby: Family Business, we were excited about the opportunity and the movie did not disappoint! My 7-year-old loved it so much that he asked to watch it again almost immediately!

Keep reading below for a summary (no spoilers I promise!) and our recommendation on the film.

The Boss Baby: Family Business is the sequel to the Oscar-nominated The Boss Baby movie (2017) with a new twist; the Templeton brothers are no longer babies and have drifted apart as they grew older. Tim Templeton (James Marsden) is a stay-at-home Dad to his 2 daughters while his wife Carol (Eva Longoria) is the breadwinner of the family. They have a super-smart 7-year-old daughter named Tabitha (Ariana Greenblatt) and a sweet little baby named Tina (Amy Sedarius).  Ted “Boss Baby” Templeton (Alec Baldwin) is a successful hedge fund CEO.  Tabitha idolizes her Uncle Ted and wishes to become just like him when she is older so she works hard to be at the top of her class at the prestigious Acorn Center.

Meanwhile, baby Tina surprises the audience with the fact that she is the new boss baby of the family and is a top-secret agent for Baby Corp! She is on a secret mission to uncover the dark secrets behind Tabitha’s school and its mysterious founder, Dr. Erwin Armstrong (Jeff Goldblum). During this mission, things take multiple turns and eventually lead the Templeton brothers to reunite and re-discover the meaning of family.

Why I loved it: It is a family-friendly movie that will hold the attention of both adults and children without the worry of anything inappropriate happening or being said. It was fast-paced which helped hold my son’s attention and it definitely had a few laugh-out-loud moments for adults & kids.  In addition to the many comedic moments, the movie also takes you on a series of heartfelt moments that parents can relate to regarding their children growing up so fast and missing out on childhood.

What I didn’t like: I can’t really say there was anything bad about the movie, but I would suggest watching (or rewatching) the first Boss Baby movie before seeing the sequel.  While it’s not a necessity, I do think it will help viewers follow and understand the new movie more easily.

Our Recommendation: Throw some popcorn in the microwave and gather the family one evening and stream this on Peacock…Or head out to the theater to beat the heat this weekend!

The film is in theaters and streaming on Peacock starting July 2nd.

2021-06-30
Previous Post: Enter To Win A PVOD Code To Watch SPIRIT UNTAMED | On Demand and In Theaters NOW
Next Post: Win Dutch Wonderland Tickets for the 2021 Season!