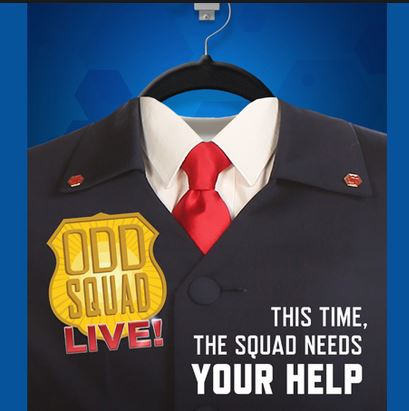 Do you have Odd Squad fans in your house? If so, you’ll be excited to hear that they are bringing this award winning series to the live stage this Fall! The show will be hitting the stage at The Lyric in Baltimore at 7pm on Friday October 14, 2016.  Tickets are on sale now via ticketmaster and range from $25-$65.

We are also thrilled to give away a 4 pack of tickets to one of our lucky readers.  Just enter below for your chance to win!

Never heard of Odd Squad before? Well here’s a little bit about the show….

Attention Odd Squad fans, there is oddness in your town and Ms. O needs YOU to help solve it. Team up with brand new agents Owen and Ophelia in this live, interactive adventure. With help from Ms. O back at headquarters, kids will put their STEM skills to the test and decode, decipher and unravel clues to stop villains like Father Time and Lady Terrible. Featuring an original script by the creators of Odd Squad and new music including songs by Soundcheck, Odd Squad: Live! is a laugh-out-loud, action-packed experience not to be missed.

Odd Squad is an Emmy Award winning series about a spy organization run by kids that investigates anything strange, weird and especially odd. Each episode follows kid agents as they track down villains, stop odd creatures and help people with odd conditions like The Jinx or The Sing-Alongs. Odd Squad is a little Men In Black for kids, mixed with Airplane and elements of Get Smart. Also embedded in each episode is a math lesson aimed at kids 4 to 8, leading to the expression: Odd is the problem, math is the solution.

ODD SQUAD: LIVE! is based on the PBS Kids series, Odd Squad, created by Tim McKeon and Adam Peltzman with original music by Paul Buckley. It is produced by The Fred Rogers Company and Sinking Ship Entertainment. Major funding for Odd Squad is provided by the Corporation for Public Broadcasting & the U.S. Department of Education.